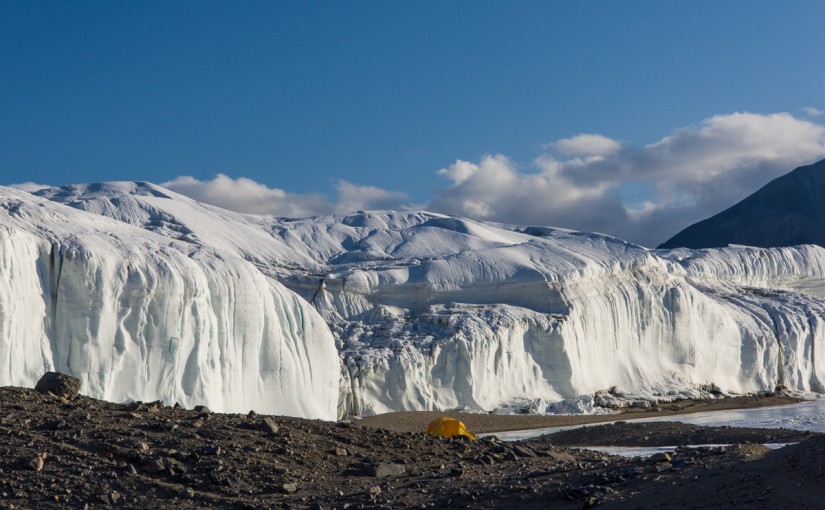 I spent Dec. 18 to Dec. 23 at what may be the most beautiful field camp site in Antarctica. Having seen a grand total of four field camps, I am admittedly not in the best position to judge the fairest of them all, and certainly they all provide fabulous scenery. But when you come out of your tent and towering over you a mere matter of yards away are the glistening white walls of the Canada Glacier with inset vertical crevices of blue ice emitting a turquoise glow, that’s hard to beat. I mean, check out that photo above. That little yellow tent in the middle is where I slept. Now look at the photo below — you crawl out of that tent turn around, and you are that close to it.

The view down the lake from the campsite toward the Suess Glacier (that light-colored triangle you can glimpse at the end of the lake) is not too shabby either:

The Lake Hoare field camp is the first to have the vintage Korean-War-era Jamesway huts replaced. You’ve seen the Jamesways in my posts about New Harbor and Lake Bonney. In the near future, word is that all will be replaced with this more functional rectangular design, that allows for more wall storage, higher ceilings, and windows that you could more easily hang curtains on if you wanted to shut out the 24-hour light. Lake Hoare is a busy camp with three small lab buildings, two “rocket toilets” (outhouses with the capability of incinerating human waste and transforming it to non-polluting ash) plus a standard Antarctic camp outhouse as a backup. The camp is presided over by Rae Spain, a 35-year US Antarctic Program veteran who coordinates the various activities of the Dry Valleys LTER camps, which include Lake Bonney and Lake Fryxell — the comings and goings of the researchers, some of whom move from camp to camp throughout the season, the helicopter supply schedules (due to the number of people working in the area there are frequent visits from helicopters, ferrying passengers, food, water, supplies and waste between McMurdo and the Dry Valleys camps as well as short hops between the camps). Rae is an imposing-looking woman, about six feet tall, who wears her hair in a thick braid that reaches to her hips. She’s organized, efficient, and a masterful cook, one night transforming the field camp ingredients into a tasty dinner of Indian curry.  (And in between analyzing soil samples in the lab, Dave, one of the scientists, whipped up some naan dough, which he baked on the outdoor grill to complement the meal. That’s right!) Then there’s Renee, Rae’s assistant and all-around field camp utility player, who, when not occupied with assisting Rae at the hut or the researchers in the field, enjoys baking cookies and other desserts with an attention to detail that would impress Martha Stewart. I digress — but it’s hard not to talk about Lake Hoare without mentioning the food.

The research at the Dry Valleys LTER centers on the unusual polar dessert ecosystem, with its mostly ice-free terrain, the stationary Canada Glacier (in other words, it’s grounded and not sliding out to sea) and three perpetually frozen lakes: Lake Bonney, Lake Hoare and Lake Fryxell. (Fryxell is on the other side of the Canada Glacier from Hoare.) The lakes are covered with ice that is about four meters thick, in other words, about 13 feet. That’s just the ice — there’s deep water beneath that. Lake Hoare, for example, has an average depth of 30 feet and a maximum depth of 112 feet. This time of year, the ice at the edges, which is over shallower water, melts in the sun, so there are makeshift bridges to get across to the thicker ice without getting your feet wet, like the one shown at left.

Anyway, late on the evening of the 21st, one by one the camp denizens closed up their laptops, finished their tea or whatever they were doing in the hut and brushed their teeth (field camp life breeds a peculiar intimacy where you floss, brush and spit out your toothpaste into a bucket in front of people you’ve known for all of three days) and went off to their tents to sleep. By about 11:45 p.m. only Dave and I were left, working at our laptops. “The light is really beautiful out there,” Dave remarked. I’d been thinking that I should photograph the glacier in the evening when the light was on it, because in the morning it’s in shadow. The wind was calm, it wasn’t bitter cold, and he was right, the glacier was glowing in the sun against a sapphire sky. So even though I’d hiked to the Suess Glacier and back between 1 and 8:30 p.m. that day, I decided I should take advantage of the conditions and just sleep in the next day. From midnight to almost 2 a.m. I roamed around the campsite taking most of the pictures you see here. The only ones with this post that weren’t taken then are the ones above of the bridge, the hut and the view down the lake toward the Suess Glacier.

This being a LTER (long-term ecological research site) there is a stream gauge to capture the flow of the stream of glacial meltwater that flows down the hill alongside the glacier and into the end of the lake. I came across the above plaque on the side of the gauge box atop one of mounds overlooking the stream, which explains that the stream has a name: Anderson Creek at H1. It also helpfully notes that “This gage [sic] box may be used as an emergency shelter for one or two persons.” That struck me as an odd kind of qualification. What do they mean by one or two? Depending on overall size, shape, interpersonal compatibility and relative degree of distress of said persons? I hadn’t even noticed the gauge before coming across the plaque because it’s tucked behind a mound. It’s not a tall structure so the flow must never get very high:

My initial plan was just to photograph the side of the glacier. But as I was walking around the shoreline, I noticed a lot of beautiful forms in the surface of the lake ice that were thrown into low relief by the light of the midnight sun. Here are a few of my favorites. An NSF glaciologist on station referred me to a lake ice web site where I found some of them:

This patch of snow high on a slope above the campsite (left) never changed the entire five days I was there. I privately referred to it as “The Smoking Monkey.” If you’re too young to remember them, Smoking Monkeys were a novelty item for children during the “Mad Men” era, made in Japan — a little plastic monkey with a set of tiny cigarettes the thickness of a toothpick. Put one in its mouth, light it, and the monkey blew tiny smoke rings. For some reason nobody thought this was an inappropriate toy. You think I’m just blowing smoke? Here’s one that’s for sale on eBay: 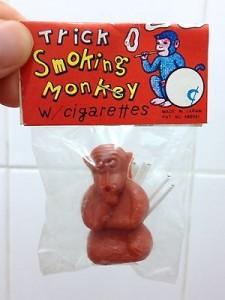 Enough about smoking monkeys. I’ll bring this post to a close by waving goodbye:

3 thoughts on “Midnight Ramble on the Lake Hoare Shore”