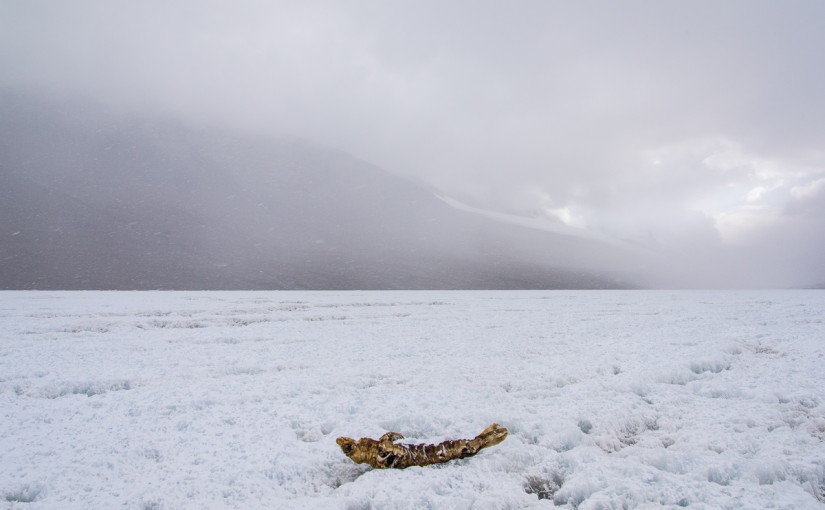 Let’s clear up one thing that I get asked a lot: there are no polar bears in Antarctica. That’s the Arctic. The only mammals are marine mammals, found along the coasts: seals — which I saw on a number of occasions — and whales —which I did not see at all. The only birds I saw were skuas, which are feisty brown birds related to gulls, and Adélie penguins. Uphill from the sea ice pressure ridges in New Harbor beneath the Double Curtain Glacier was a highly unusual sight — several square yards of gray and tan moss — the only plant life I saw growing in soil the entire seven weeks I was in Antarctica. Further inland, walking the gravel hills and ice-covered lakes of the Dry Valleys, you and your companions are the only living things in sight — nothing green, feathered, scaly or furry. The exception was a lone skua occasionally spotted in the vicinity of the Lake Hoare field camp, nicknamed Taylor by the field camp residents. The major life forms of the Dry Valleys are microscopic organisms in the lakes, streams and soil that scientists sample and study as part of the long-term ecological research study, but of course, they’re not visible without a microscope.

Against that backdrop, it was startling to periodically come across the bodies of mummified seals in the Dry Valleys, several miles from the ocean. Seals are built for swimming. Underwater footage shows even 10-foot-long, 1,200-pound Weddell seals gracefully gliding along. They spend most of their time in the water, occasionally poking their heads out to take a few breaths. Periodically, they laboriously haul themselves onto the ice to rest, like the young Weddell seal in the photo at the top of this post. The ellipsoidal body shape, wing-like flippers and tail that serve them underwater are definitely not made for walking. Once you’ve seen a seal galumphing with great difficulty across the ice like a giant slug, it’s even more remarkable to imagine how they could travel for miles on their bellies, dragging their rotund bodies over ragged lake ice and gravel hills. An oft-quoted statistic is that mummified seals have been documented as far inland as 41 miles. If that’s the case, this one at Lake Bonney must be one of them, since that’s about how far the lake is from McMurdo Sound:

The dry, freezing climate and lack of bacteria and invertebrates that break down carcasses in warmer regions leave the seals in varying states of preservation that make it impossible to tell how long they’ve been lying there by their appearance just by sight. Some are mostly skeletal, some still have a substantial amount of leathery skin attached, but you can’t tell if they’re a few years old or several hundred without doing a laboratory analysis of carbon and nitrogen isotopes.

A research team led by Paul Koch and Brenda Hall in the 2012-13 and 2013-14 seasons has done just that. They saw these seals not as a weird curiosity, but as a way to investigate the history of seal populations over the past 1,500 years, and how they adapted to changing amounts of ice in McMurdo Sound in terms of their diet, which is also revealed by the chemical analysis. Up until about 500 years ago, McMurdo Sound had far less ice than it did afterwards, when ice shelves formed. Knowing how the seals responded and how their diet changed would help predict how warming oceans might affect them in the future. To that end, the scientists a undertook a comprehensive inventory of Dry Valleys mummified seals and took over 400 samples to be analyzed (read more about the study in the Antarctic Sun and this press release). “Studies of fossils let us see how species do or don’t adapt to environmental shifts. Here, we are using that approach to explore the adaptability and vulnerability of different Antarctic seal species to less icy conditions in the near future,” said Koch.

If you’ve read every single one of my Antarctica blog posts, you’ve encountered a few of the following scenes before, but I thought it would be interesting to bring them all together in one place, along with some information about what is known about them.

The presence of mummified seals has posed a scientific mystery since the first explorers of the region in the early 1900s ran across them. They’re generally small, and I have run across only one account of researchers encountering a live seal in the Dry Valleys. The current assumption is that these are young seals that get lost during whiteout conditions in the harsh Antarctic winter, when the seals usually stay near cracks in the sea ice. Without visual cues, they get turned around and crawl along in a futile search for the sea until they expire. As of October 2015, Koch’s team published that it had reported identified mummies of over 300 crabeater seals, 100 Weddell seals and around 20 leopard seals, a proportional breakdown roughly corresponding to their current numbers in the sound. That sounds like a significant number of wayward seals, but the mummies can be as much as 1,500 years old. Koch told the Antarctic Sun that it may be that only one or two lose their way each year.

The leopard seal shown below, on the Lake Fryxell side of the Canada Glacier, is a rare sight on a few counts. Leopard seals make up less than 5% of the mummified seals. This one is pretty much intact, including fur, which is unusual. And unlike the vast majority of the mummies, we know for sure that this one is a recent arrival, because this area is frequently traversed by Dry Valleys researchers and they took note of its appearance a couple of years ago.

Mummified seals are not only found in the Dry Valleys. There’s one on the black sand beach at Cape Royds. It’s notably well preserved, but it’s right by the sea ice so there is no mystery as to how it ended up there:

I photographed all the mummified seals I encountered, with the exception of one that had remarkably made it the length of Lake Hoare and part way up a hill near the Suess Glacier. It was dismembered into two halves, lying in the dirt side by side, which for some reason struck me as more grotesque and disturbing than a dead seal in one piece. I just didn’t want to look at that again! But probably the strangest one I saw was also near the Suess Glacier: rather than lying on its back or its side, it’s perched on its belly, tail curving upwards and head lifted as if flash-frozen in mid motion.

The scientists who have studied these seals are interested in them as a fossil record and a way of understanding the history of ocean ecology. What drives the seals to travel for miles over land and how they survive the journeys is ultimately beside the point in terms of their research. The lack of information about that aspect is a reminder, though, of how little we still know about what Antarctic animals do during the long, dark winters — that includes seals and penguins. At one of the science lectures, I asked Jennifer Burns, who has been studying Weddell seals for over 20 years, if she had seen any changes in behavior related to climate change. She responded that she hesitates to make comparisons because monitoring and tracking hardware is so much better quality now than 20 years ago. Devices are smaller and less intrusive to attach to the animal — in the past they were bulky and generally didn’t stay on long. In years to come, perhaps more seals will be tracked and shed some light on the mystery of the lost seals.