Friday, Nov. 20th, I arrived at Sam Bowser’s camp at New Harbor (also known as Explorer’s Cove). The campsite is on the shore of the sea ice. They need access to the water because they scuba dive under the ice to collect mud from the bottom which they sieve in the lab to collect foraminifera, the one-celled creatures Sam studies. The Antarctic variety are particularly large and easier therefore to study, which is why he’s been coming here for years. He’s interested in their adhesive properties, because they secrete an adhesive that securely glues grains of sand together to form protective shells, and they do all that underwater (and the Antarctic variety do that in 28.5 degree F water to boot). How do they do it? The answer could have practical applications — imagine having an adhesive that would work while submerged that could be used during surgery, for example.

At the camp are Sam’s wife, Laura Van Rosk, an artist who while here assists in the sieving, sorting and organizing of the foraminifera samples, Amanda, also a lab assistant, and Henry, Mike and Paul, who take turns diving. We are all living in a structure that has been here for many years that has a kitchen and dining table in one section, cots set up for sleeping in the other, and a passageway in between, which is where the visitor’s cot is; that’s where I’ve been sleeping. The lab and the outhouse are each separate buildings. Everyone has been very welcoming and helpful.

There’s also a dive hut on the sea ice, although sometimes they dive from different holes. Amazingly, even though the dive hut isn’t that far from shore, the water is 80 feet deep beneath it. The sea ice closest to the shore is very rough, much more choppy and irregular than at McMurdo, because it’s multi-year sea ice as opposed to ice that freezes and melts every year. There’s a pressure ridge they call “the moat” where the multi-year ice meets and ice that thaws and melts, and is therefore flatter. Riding a snowmobile across the multi-year ice was a bumpy ride; walking on it takes extreme care as it is also quite slippery.

On Saturday, Laura took me out on the sea ice on a snowmobile. We visited a couple of spots, including an enormous iceberg that is frozen into the sea ice. I walked all the way around it taking pictures from every angle for a potential capture (i.e. 3D scan). I’m not sure if my software will process the entire iceberg as a single object, but I should be able to at least get 3D files of portions of it. Certainly, if I’m ever going to do a 3D iceberg, that’s a good way to do it, walking on solid ground as opposed to being in a Zodiac boat. It took me about 40 minutes to walk around the whole thing, taking a shot every few feet. We also saw a young seal napping on the ice, and later another one popped his head out of one of the diver’s old dive holes. Got photos of all that. I’ve posted a selection from the day here. 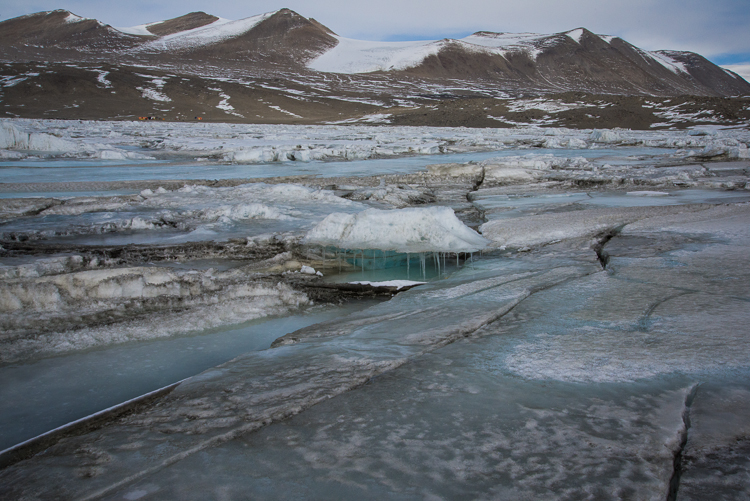