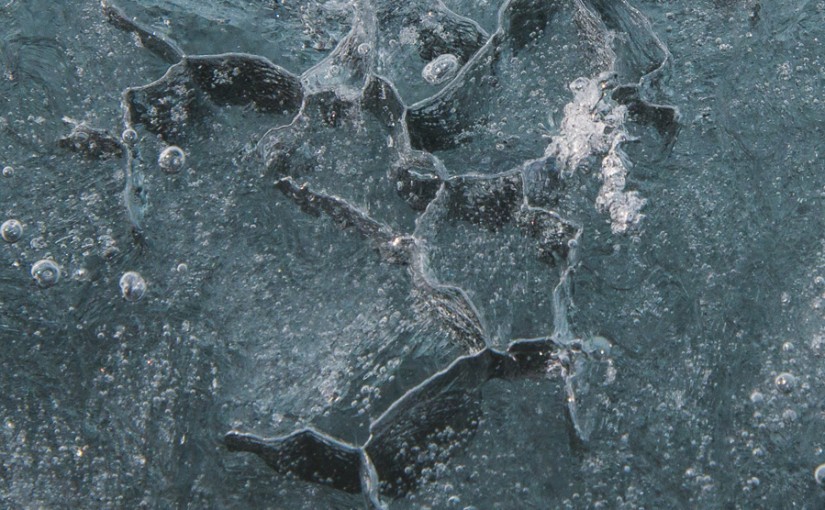 For my Antarctic Artists and Writers Program project, I expected to be photographing glaciers and large ice formations, but once I got to Cape Royds and the Dry Valleys, I also discovered some small scale — even tiny — ones that fascinated me in their variety and the unexpected shapes or colors. It seems that the extreme cold of Antarctica generates some peculiar ice formations in the freshwater lakes fed by glaciers.

Some of these lakes melt around the edges this time of year (December-January), but never thaw completely. I don’t know if the kind of ice formations you’ll see in the photos that follow are found elsewhere in other places that are cold much of the year, for example, the Arctic. Nobody I’ve asked so far could tell me, but then again, most people who are working in those places as mountaineer guides or researchers aren’t attending to that ice, except as a practical matter to check out if it’s safe to walk on it. So if anyone reading this has more information about what physical processes are causing these shapes, feel free to comment!

It also could be at Cape Royds that because of its proximity to the sea, there are salts in the water that are contributing to some of these effects. This cracking pattern at the left was not photographed at the lake, but at the edge of a black sand beach where there was a pressure ridge and sea ice. But snow was melting from a ridge above the beach so it’s hard to say if it’s frozen freshwater or frozen sea water or a combination.

Some of the unusual patterns I found were at the center of one of the inland lakes at Royds, where gravel from the surrounding hills had blown onto the ice, piled up there, and there was a frozen flat-topped ice structure sitting on top of it. There were a lot of these isolated flat-topped ice structures at Lake Hoare in the Dry Valleys, too. The ice designs I found at Lake Hoare will be the subject of a later blog post. The explanation I got at Hoare was that while the ice forms from the bottom (and in the Dry Valleys the lake ice is a few meters thick), the frozen surface of the lake ice ablates — that is, vaporizes into the air — but sometimes leaves areas that haven’t ablated still sticking up above the frozen lake surface. The next few photos were taken near one of those structures, shown in the above photo. It was probably about three feet high, several feet wide and extended for several feet in the middle of the lake. You can see in the photo there was a lot of sediment around it.

In the lakes at Cape Royds you’ll also find what looks like torn up bits of cream, tan and orange paper scattered on top of and within the ice. Those are algal mats. Around that tabletop shaped formation at the center of the lake were these “collages”:

I’ve saved the strangest formation for last. This one was by the shore. The ice was a deep shade of turquoise, and inside were vertical ribbons caused by…what? They were definitely three-dimensional as you moved around them. I’m trying to find out what causes them. They looked to be about 3/4 of an inch wide. Here’s an overall photo and a detail:

In a future post I’ll show some of the small surface ice formations from Lake Hoare, which were different than these. I’ve encountered much more variety of ice in Antarctica than I had expected, a happy discovery.