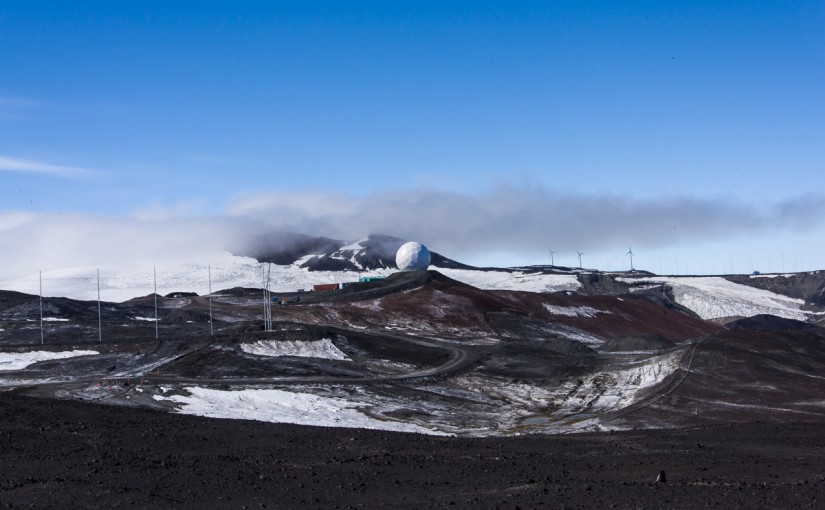 It was late in my stay at McMurdo when I finally got around to walking the hiking trails at two places I could see every time I walked out of my dormitory: Hut Point and Observation Hill — Ob Hill as the McMurdites call it. These photos were taken on two different days. When I arrived in November, the Ob Hill loop trail that circles it about one-third the way up was open, but the trail to the steep summit was closed due to ice. On December 29, six days before I left, I took advantage of a mild day (i.e. it was 20 degrees F with no wind — that counts as mild at McMurdo) and walked up to the top of Ob Hill, which has an elevation of about 750 feet. There it is on the right in the photo below.

It took 15 minutes to walk to the Ob Hill loop from my dormitory (I lived in one of the four identical brown buildings near the large blue building that you can see in the photos above and below; click any photo to see an enlargement). It took 20 more minutes to get to the summit on a progressively narrower trail that is very steep with a lot of loose, gravelly volcanic rock surrounded by larger volcanic rocks. If you see the shaded ridge up the center of the hill in the photo above, that’s pretty much the line of the trail. The further up you climb, the steeper it gets. I had flashes of mental images of myself skidding off it and bouncing off rocks on the way down like a playground ball, so I tread carefully, pausing frequently to make sure I was on the best path, and reassuring myself periodically, “You’ve got this.” A few days earlier the annual Ob Hill Uphill, a competitive race to the top, had taken place. Hopefully, the racers spread out before they got to the upper part, because I cannot imagine how you’d pass someone on that trail. No, I don’t have that need for speed. But hey, I’ve got this. I made it to the top without a mishap. There, wedged between two rocks, I found a new black water bottle with a McMurdo emblem that sold in the station store for $30 (left from the race?). As my good deed of the day, I brought it down and handed it in to the Recreation Office. If that was your bottle, you’re welcome!

From the summit, you have an excellent view that encompasses McMurdo, New Zealand’s Scott Base, the golfball-shaped observatories, the Dellbridge Islands and Mount Erebus.

At the top of Observation Hill is a nine-foot wooden cross, built in 1913 and hauled there by sledge by the crew of the Terra Nova, the ship that carried British explorer Robert F. Scott and his party to Antarctica for their attempt to become the first to reach the South Pole. Scott and four men reached the pole in January 1912, only to find that Norwegian Roald Amundsen had beat them to the record by five weeks. All five of them died in March on the return trip. Their tent, containing their bodies and belongings, was discovered by a search party eight months later, including Scott’s last diary, where he recorded their final days and ended his last entry, “For God’s sake look after our people.” The sad story is summarized here.

The other place to take in a view of McMurdo is from Hut Point, so named for the historic Discovery Hut that sits at the end of it, which was built in 1902 for Scott’s first Antarctic expedition, in 1903-07 and used by subsequent exhibitions until 1917. Below is the view of Hut Point from the back door of my dormitory. You can see the hut and another melancholy monument, this one dedicated to George Vince, a member of Scott’s party who died in an accident in 1904, when he fell off the cliffs into the McMurdo Sound while trying to make his way back to the hut during a blizzard.

The Hut Point Trail winds along the top of the ridge you see to the right of the hut in the photo above. I walked the trail on a cold Sunday afternoon. It was around 20 degrees that day, too, but strong gusts of wind made it feel much colder, unlike the mellow morning I climbed Ob Hill. As you climb the trail, the most prominent landmarks ahead of you are the “golf balls.”

Looking back toward the sea ice gave me a good look at the cracks and melt pools that were developing as the ice thawed. A large number of Weddell seals had congregated there. Shaun O’Boyle, who was also photographing in McMurdo this season for an Antarctic Artists and Writers Program project, arrived before I did and has posted his photos from these two hikes. Comparing his photos from late October and early November to mine, you can see the changes in the landscape and the sea ice that took place within about two months.

Climbing further up the ridge, I looked down at the other side and found a small pond with three glowing green spots. You seldom — or never — see anything green in the Antarctic landscape, so it was a weird sight. I assume there is some algae growing there, because no green plants grow in Antarctica.

Another oddity I spotted: a small volcanic rock that had been eroded and hollowed out to the point of resembling a sponge:

The ridge trail leads to the small, dark “golf ball” and then winds back into town. I planned to walk the entire loop, but the wind kicked up with 20-knot gusts coming from the sea ice. Not only was it making my eyes water, but as I walked along the top of the ridge, I had to brace myself to keep my footing. I decided that it was time to turn back. As I headed back, I came upon another hilltop memorial, Our Lady of the Snows. A statue of the Madonna on a ironwork frame topped by a cross, and held in place by a pile of volcanic rocks. Beside it, a plaque explains that during the construction of McMurdo in 1956, Petty Officer Richard T. Williams of the U.S. Navy Seabees was part of a crew bringing supplies across the sea ice from a ship anchored 30 miles away, when the tractor he was driving broke through the sea ice north of Cape Royds and “plunged 350 fathoms to the bottom of McMurdo Sound. His body was never recovered.” I hadn’t realized until reading the plaque that Willy Field, one of two airfields used by the U.S. and New Zealand Antarctic Programs, was named for him. It’s formal name is the Williams Air Operating Facility.

I walked back to the dorms, following the road up from the ice pier. Now that the sea ice was breaking up near shore, the colorful fishing huts used by seal researchers and dive teams studying underwater creatures during the first part of the research season had been pulled off the ice and stored along the road:

I also noticed for the first time that there was a pink flamingo outside the Fuels Building:

Nearby is a perky welded sculpture along the road overlooking Hut Point and the ice pier of what I take to be a whale, made by an anonymous worker out of chains and rods. While clearly playful in intent, it struck me as in its own way congruent with the other monuments erected around McMurdo by grieving men. The wooden cross dedicated to Scott and his comrades is inscribed with a quote from a poem by Alfred Lord Tennyson: “To strive, to seek, to find, and not to yield.” Made from discarded found objects, the whale embodies a similar ingenuity, optimism and creativity that the people on base find within themselves. Sometimes, you just have to smile and say, “I’ve got this.”

ESPN isn’t here, but luckily for you, I am, to give you the latest Antarctic sports news. Last night was the annual tug-of-war competition between McMurdo Station and our New Zealand neighbors (aka the Kiwis) at Scott Base, which is a short drive away. Apparently New Zealand always wins. Could the Americans break their losing streak?

It was a total bro fest, at least on the American side, with much boisterous pre-game banter. There was a lengthy weigh-in before the competition, to make sure the teams were each 115 stone — New Zealand originally set up the competition, so that’s a British measurement. (“What’s a stone?!” someone called out during that announcement. Answer: 14 lbs.)

To make weight, or maybe just because bros will be bros, some of our guys stripped down to short pants and tanks or t-shirts, while the New Zealand team members were low-key in demeanor and stayed sensibly dressed for the 20-degree weather in long pants and jackets. Our biggest guy weighed in at 303 lbs. (A New Zealand guy standing nearby remarked, “Wow, that’s two of me.”)

There were three pulls, so whichever team won two out of three would win. We definitely had the burlier team, with seven Americans facing off against eight Kiwis. Either they had better technique, or maybe distribution of weight between more guys gives the group better traction, because they won the first pull fairly quickly. And during the second pull the American team was on the verge of winning, until one of the Americans lost his footing and the Kiwis hauled it in. So New Zealand took home the trophy for yet another season.