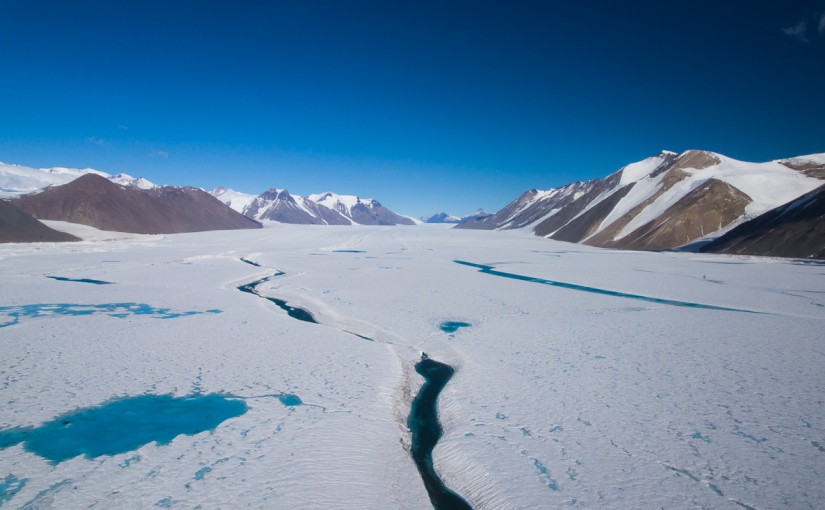 To travel to the four field camps I visited during my stay in Antarctica I took a total of eight helicopter trips. Traveling by “helo,” as they say there, or watching them take off, land, and pick up sling loads never got old. I don’t think it was just because I was an Antarctic newbie; even at the field camps where helicopters took off and landed a few times a week, or in the case of Lake Hoare, a couple of times a day, camp residents would stand at the hut window or just outside the door to watch.

Since all fresh water, fuel and food is brought into the field camps, and all waste is packed out, the helo pilots are busy all day during the field season. And when I say all waste is packed out, I mean everything: gray water (water left from washing hands, faces, and dishes), human waste (metal drums for the pee, five-gallon plastic buckets for the poop), trash (sorted into recyclables, non-recyclables, and food waste). By treaty, all traces of human presence are to be removed from the environment, which as you can imagine, demands a lot more thoughtfulness in sorting and disposing of trash than we’re used to, not just in the field, but at McMurdo, too. Heavy items are suspended under the helicopter as a sling load. Laura Von Rosk has posted a short video of sling load take-offs from New Harbor on the Bravo! 043 Facebook page (see December 9, 2015 post).

Helicopters take off and land vertically, which is a different sensation than the headlong forward motion of an airplane liftoff. On December 16th, a brilliantly sunny day, I shot this video of the helo take off (posted on YouTube) from McMurdo Station on the way to Blood Falls in the Dry Valleys. (I’ve already discussed Blood Falls in the previous post.) The video starts just after the helo has risen off the ground and is turning around to head out over the sea ice. Mt. Discovery is in the distance.

Mike, the helo pilot that day, knew that I was interested in ice, and asked if I’d like to see the recent changes to the edge where the sea ice meets the ice shelf. Well, yeah! The last time I’d flown across the sea ice to the Dry Valleys had been almost a month before, and it was indeed different. Meltpools filled with blue water streaked the surface of the ice shelf, including a stream flowing to the sea ice. The rest was a corrugated pattern of white ice and snow outlined by dark brown sediment that had blown there from the surrounding mountains, carried by fierce Antarctic winds.

We flew over a large crack in the sea ice that was remarkably regular in shape: three fairly straight segments at close to right angles. When I showed this photo to glaciologists Doug MacAyeal [pron. mac-hale] and Ian Willis, they told me that it was the result of movement analogous to that of the tectonic plates of the earth’s crust, where forces were pulling the sea ice away from the ice shelf, creating the two cracks that are vertical in the photo. The horizontal crack had then opened between those two cracks, connecting them; Doug pointed out how its edges were jagged, rather than clean.

As we headed across McMurdo Sound toward the Kukri Hills and the Dry Valleys a low white object appeared in the distance, resembling those gift boxes they give you at a department store. It was a huge tabular iceberg that has been frozen in the sea ice for at least a few years, according to another of the helo pilots. I had flown over it once before, on the way to New Harbor.

As we got closer, the immense scale became evident. What looked like a perfectly flat top and planar sides from a distance was inflected with vertical ridges and horizontal lines. Tabular icebergs have flat tops and steep sides, and are created by breaking off from ice sheets or ice shelves, so presumably this one was once part of the ice shelf.

At one corner, a huge chunk is poised to fall. The helo pilots have been watching it all season: “I’d love to be flying over it when that happens,” one told me. That will be quite dramatic when it gives way and tons of ice come crashing onto the sea ice, though odds are nobody will be around to see it. The McMurdo helicopter pilots enjoy the ever-evolving panorama beneath them as a perk of the job. On my last flight I asked the pilot about that and he said, absolutely — flying over other locations can be very monotonous by comparison.

As we began to enter the area of the Dry Valleys, we saw a variety of other patterns in the ice below: an area where it had broken into large, roughly rectangular sheets; turquoise melt pools and a stream between sparkling white ridges; and a long blue melt pool with parallel sides as if someone had built a canal there. The way the sea ice could fracture along long straight lines into almost rectangular shapes intrigued me.

Our helo flight to Blood Falls turned and crossed over the steep gravel Kukri Hills. On the other side of the valley, you could see the Canada Glacier spilling down to Lake Fryxell, which was on the right, and Lake Hoare, on the left. We landed briefly at Lake Hoare to drop off some supplies before continuing to Blood Falls. That was my first view of the field camp where I would return a few days later and spend five nights. If you check out my earlier blog post about Lake Hoare, you’ll see ground level views of the camp. From the air, it’s clear how tiny the main hut, lab buildings and tents are in relation to the Canada Glacier.

The final photo in this sequence was taken just before we got to Blood Falls, looking into the Taylor Valley toward the distinctive striped hills resembling chocolate sandwich cookies, yet another unexpected sight in a trip that was full of them.