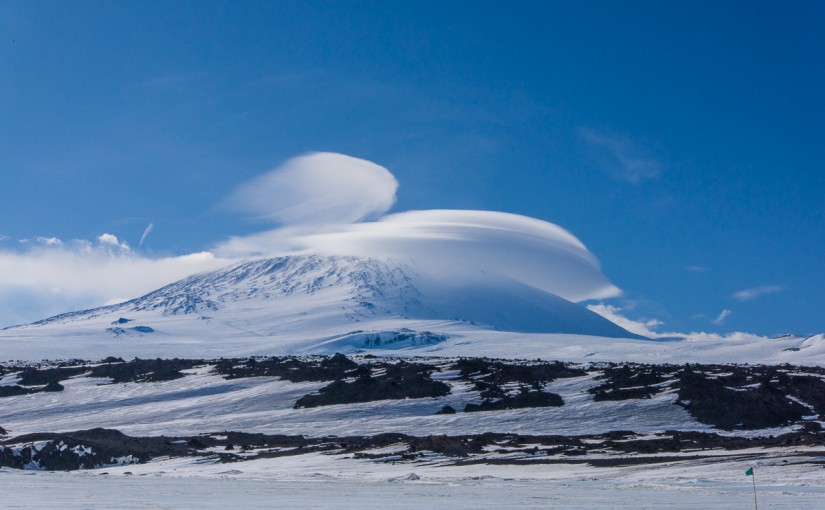 The above photo of a cloud formation known as “cap and banner” is the Jan. Cloud of the Month on the Cloud Appreciation Society’s web site. You can also see it on their web site. I photographed it in Antarctica on November 25th, after traveling by snowmobile over sea ice for about 90 minutes to the historic Terra Nova Hut at Cape Evans.

The hut was built in 1911 for the 1910-13 expedition, led by British explorer Robert F. Scott, and eventually I’ll post some photos of the fascinating interior, which is filled with period tools and supplies the explorers left behind, including snowshoes for ponies (they brought ponies to Antarctica! on a ship! alas, it did not work out well), a taxidermy penguin, piles of 100-year-old cans of food and bottles of medicine, fur boots, old socks, etc.

The Cloud Appreciation Society, a project started by Gavin Pretor-Pinney, the best-selling author (at least in England) of The Cloudspotter’s Guide has amassed a huge online library of cloud images sent in by cloud enthusiasts all over the world for the last several years. I submitted the photo after looking up Erebus on Google Images and finding nothing else like it. I thought it likely they’d post it eventually, but was pleasantly surprised to see they not only posted it immediately, but featured it. They’ve classified this particular cloud as a “cap and banner”.

Although going inside the hut was the purpose of the trip, I couldn’t help but notice that a picture-perfect lenticular cloud was forming above nearby Mt. Erebus. I knew it was a lenticular cloud, because I learned about the different types of formations while photographing clouds intensively a few years ago. Lenticulars often form right above isolated mountain peaks, and if they form a base low enough to cover the summit they’re known as cap clouds. Banner clouds are more like a stream of vapor — but not snow — flowing off the mountaintop. (More info about both types here.) About two-and-a-half hours before I took the photo there was no indication that anything special was brewing:

I just looked at my photo catalog on my hard drive and realized I must have taken a few thousand photographs of cloud formations between 2007 and 2012 — I’ve got a few hundred digital negatives on my hard drive and those are only the ones I didn’t delete! It did get to the point where I’d look at the sky and think, yeah, that’s nice, but I’ve already taken that picture 50 or 100 times. So when I saw this, I thought it was cool, but knew I should keep an eye on it in case it got even better:

So, in between two walks through the hut, taking pictures, and a climb to the hilltop memorial cross to explorers who lost their lives, I kept checking on it. Looking back at the time stamps of the photos, I can see that I took my first photo of that cloud almost exactly an hour before I took the January Cloud of the Month photo, which I decided was most perfectly formed, and just 9 minutes after that, it was starting to flatten and become much less interesting. In between the first and last photo, I kept checking on it, because prior experience alerted me to the fact that (a) this was an unusual formation and (b) being a cloud, it wouldn’t last long. The fact that it had even drawn my attention when it was not the purpose of the trip, occurred to me as I read “How to Cultivate the Art of Serendipity” a thought-provoking New York Times article on how inventions come about by Pagan Kennedy, which was published a few days ago, on January 2nd.

Kennedy notes that often major inventions or discoveries come about because of an accident, while the inventor was looking for something else entirely (50% of the time, according to one survey of patent holders). While this may look like luck, she cites a researcher named Sanda Erdelez who posits that there is something more going on: that people who make new discoveries may be especially inclined to notice things that were not on their agenda and to take a detour to investigate when that happens. Also that such people enjoy encountering odd bits of information for no particular reason than to see if anything interesting turns up. Kennedy calls that process “gathering string.” String gatherers/detourers are what Erdelez calls “super-encounterers.” I recognize that tendency in myself. Kennedy is very upbeat about the trait, suggesting it nourishes creativity. But I can attest like any personality trait, digressive wandering has its downside that it behooves one to be aware of lest you look up at the clock and notice you just spent way more time “string gathering” than you’d intended, let commitments outside your normal routine totally slip your mind, or exasperate people you’re recounting something to, leading them to plead, “Could you get to the point?” (Yes, if you are one of those people, you may feel free to stop me.)

After reading Kennedy’s article, it occurred to me that the only reason I knew to attend to what was going on above Erebus that day was that when I was taking all those cloud photos I was reading everything I could get my hands on to understand how they formed and moved through space. The information stuck in my head, even though I never saw a lenticular cloud in person until November 25, 2015 when I took these photos. So was I lucky that the cloud came together while I happened to be there? Yes. But without the prior intellectual wandering which was really just because I found it personally enriched my experience of the natural world, I would probably have taken the shot above at 11:51 with the hut in the foreground and gone back inside, and missed the really great moment an hour later.

On January 4th, I left the ice, as the expression goes in the US Antarctic Program. I’m sitting in a hotel room in New Zealand typing this post. The last week I was in Antarctica it started to hit me that it was the last week I was in Antarctica. Travel for me is always a period of “super-encountering” that I simply need periodically, to recharge my batteries. But this is the longest trip I’ve been on in 40 years, and in the most alien, unfamiliar place I’ve ever visited. I generally had an idea what to expect, except that nothing quite prepared me for any of it. I wasn’t sure if it would be what I hoped; it was way more than what I hoped. I haven’t even finished posting material to this blog. There’s more coming as I work my way through it.

And I found myself rising to the occasion to handle everything from being dropped into a field camp to live in a tent with people I had never met, to sleeping in a tent in 20-degree weather, to driving a snowmobile, seven hour hikes in cold weather, to realizing I could indeed make 3D captures of really, really large things — way larger than I’d expected. I met wonderful people and I also navigated the sometimes-quirky McMurdo social scene, a subculture with its own mores and routines shaped by communal living of adults of widely different ages and backgrounds living in a remote place. I couldn’t take anything for granted or predict what sight I’d come upon next. Along would come delicate designs in the lake ice, boulders carved into a surrealist sculpture garden, or even, for five minutes, a perfectly poised cap and banner cloud, spinning above a volcano.