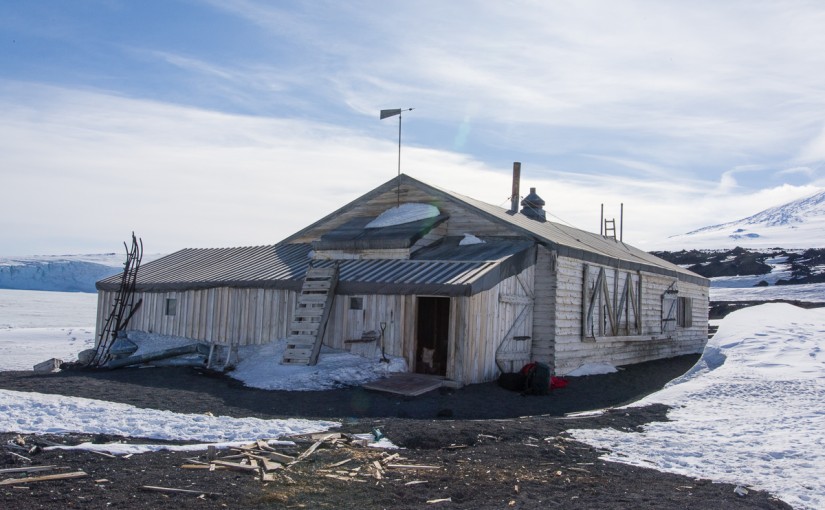 One day in late November, five of us took a day trip over the sea ice by snowmobile to visit Scott’s Hut at Cape Evans. To paraphrase the words of a bronze plaque outside the building, the hut is protected by international treaty and maintained as an historic monument to the British Antarctic Expedition of 1910-1913 led by Robert F. Scott, who built it in January 1911 as the expedition headquarters. (Read a brief history of the expedition.) Like Shackleton’s Hut at Cape Royds and Discovery Hut at McMurdo, it is administered by an historic trust headquartered in New Zealand. To obtain a key and enter, at least one member of your party has to have received authorized training. I was amazed at how much stuff had been left inside, and because of the cold dry climate, it’s in a remarkable state of preservation. It’s like stepping across the threshold into a time capsule from 100 years ago.

Part of the briefing before going to the hut was to warn us to not touch any of the artifacts and to walk carefully. Outside the hut, not even shards of broken glass, splinters of wood or leftover bones from dinner were to be touched. Everything was left as is. Behind the hut, the anchor from Scott’s Terra Nova ship is half buried in the volcanic soil:

Here are a few more exterior photos to give a sense of the location:

The trip was of particular interest to Shaun O’Boyle, a photographer who was the only other Antarctic Artists and Writers Program grantee whose residency overlapped with mine. Shaun has a background in architecture as well as photography and his project, “Portraits of Place in Antarctica,” focused on documenting the buildings and manmade structures in the area around McMurdo from the past 110 years. Three Lockheed Martin staffers also came with us, McMurdo veterans Ralph Maestas, a videographer, and his colleague Joolee Aurand, who both also ran the base TV station, and Mike Lucibella, who was there for his first season as editor and reporter for The Antarctic Sun, the official news outlet for the U.S. Antarctic program.

I’d taken snowmobile training 10 days earlier, the day after I arrived at McMurdo, but this was the first time I’d driven one since then. I was confident about being able to keep my balance on it, even on inclines, but when I had to put the thing in reverse, it tended to abruptly lurch backward. However, I figured after two 90-minute trips, I’d pretty much have it down. My biggest problem turned out to be, as someone who wears glasses, how to keep them from fogging up while keeping my face from freezing! People are always asking me how cold it was in Antarctica. Well, that day it was in the mid teens, and going 25 miles an hour on a snowmobile, the wind on your face felt even colder. I started out covering my face with the program-issue balaclava:

Cape Evans is the largest of the historic huts. There is one large section where the men slept in bunk beds, cooked, kept their medical supplies, had a darkroom for photography, and work tables for their telegraph and laboratory equipment. Seeing the crepuscular light shining in through dusty windows onto the dark wooden walls, old pitchers and crockery was like walking into a painting by Vermeer or Chardin. What surprised me was how much stuff the explorers left behind. Did they think that maybe other explorers would make use of them in the future, or was it just too much trouble to pack it up and take it home to England? Whatever their reasons, they left not just equipment and leftover tins and crates of food, but personal items: wool socks, fur boots, blankets, bedrolls, and arrangements of photos glued to boards for decoration. Not to mention a copy of the London Illustrated News and a large, stuffed Emperor penguin.

Exiting the living area, an enclosed corridor led to the stables and contained a bed-sized pile of seal blubber, blackened with age. Around the corner were stalls with even more boxes of supplies, tools, equipment, as well as decidedly more curious leftovers such as a box of penguin eggs, a hand-carved wooden wheelbarrow, a bicycle (a bicycle? in Antarctica?), and accessories for what turned out to be an ill-advised idea to use ponies for transportation. A couple of snowshoes for horses hang on one wall. We noticed some names stenciled on the same wall, and were puzzled at first, until realizing that those were probably the names of the horses.

You might be wondering — as we did — how much of this was authentically left as is and how much of it was rearranged and staged by the New Zealand historic trust staff who maintain the huts. A few weeks later, I was sitting in the field camp hut at Cape Royds one evening with penguin researchers Katie and Jean, when one of them heard some voices in the distance. “Here come the Kiwis,” she said. Al Fastier, the program manager for the historic sites; conservator Lizzie Meek; Martin Wenzel, a restoration carpenter; and two young women who were assisting them had been working down the hill at Shackleton’s hut for the past several days. They were about to leave and came in to say goodbye, a bottle of Scotch in hand. We managed to make room for all eight of us and their parkas in the small room (I think it was no larger than 12 x 15 feet, including the camp stove, plywood desks along one wall, propane heater, wash-up station and boxes of food). I had not been issued a permit to visit Shackleton’s hut before going to Cape Royds, so I had not gone in. I asked them about something I’d heard from somebody else, that Shackleton’s hut was less staged and in a more natural state than Scott’s at Cape Evans. This made the Kiwis smile. Actually, they said, it was the other way around. Katie noted that when she first started to coming to Cape Royds in the early 2000s, the items inside were in more disarray, and in a way she preferred it that way; you felt more of the human presence. The Kiwis acknowledged that over time items had been removed for conservation, then put back, and that there was a balancing act between protecting them and making it possible for visitors to walk around, while not going overboard with arranging.

Conversation turned to a hot topic this season: the so-called “Shackleton’s axe” — authentic or hoax? The helicopter pilots had recently noticed a pickaxe sticking out of the top of a tall, pointy-topped mound of volcanic gravel, the metal part wedged into the gravel and the handle pointing up at a jaunty angle. On the flight to Cape Royds, our pilot had pointed it out to Evan and me and said it was two miles by air from the field camp. That doesn’t sound like much, but over rugged, hilly terrain, it would be a considerable hike. The sudden appearance of the axe poking out of the pile, even in midst of that forbidding and remote area, struck many people as a possible prank. Lizzie said she’d looked at high-resolution photographs of it and that the markings on the axe were consistent with the period so it plausibly belonged to Shackleton’s party. Al said that it was plausible that the mounds were used as landmarks for supply caches for Shackleton’s epic trans-Antarctic journey and that an axe could have been stuck in the top to help the expedition team find it. That makes sense, though as Jean pointed out after they’d left, why it seemed to suddenly appear, and at a picture-perfect angle, remains an open question!

Shaun’s blog has some good photos of the pickaxe, and indeed, of the Cape Evans hut and the other two huts. They’re worth checking out to see a different approach to the same subject matter than mine. For one thing, he processed his photos mostly in black and white, for another, since this project was specifically about architecture he spent a lot more time in the huts than I did, returning for repeat visits. In general I’ve found it interesting to compare our photos of the same places, seeing which places where we chose similar shots and where our different interests and personalities emerge.

Note: Cape Evans is where I took a photograph of an unusual cloud formation over Mt. Erebus that the Cloud Appreciation Society, a large online database of cloud images and information, chose as its January 2016 Cloud of the Month (see below and earlier post).