This week the mountaineers investigated the ice cave in the Erebus ice tongue, a glacier coming off Mt. Erebus, and declared it safe to visit, so the Recreation Department here began offering group trips there. Mt. Erebus is the southernmost active volcano, and despite the boiling lava inside it, the outside is ice covered. (See an aerial shot of the ice tongue.)

On the night of Nov. 27, 14 people who had signed up for the trip plus a mountaineer boarded a transport vehicle with huge tires called a Delta, driven by a woman named Serena over the sea ice to the cave. We were instructed to bring full ECW (extreme cold weather gear), which turned out to be a good thing, because when we got there, a stiff breeze added significant wind chill, and once at our destination, we had to walk about a half mile from the vehicle to the cave entrance.

Our instructions were to stick strictly to the flagged path across the sea ice on the way there and back, and make sure not to brush up against any of the delicate formations on the cave walls once inside, as well as to watch our footing in case it was slippery in spots. I was assisted in the latter by a great accessory for walking on ice called Yaktrax — they are stretchy plastic straps with wire springs wrapped around them that slip over the soles of your hiking boots and give you considerably more traction. They’d be useful for those winter days in the Northeast when you have to traverse an icy parking lot with bags full of groceries. Hey, holidays are coming up — looking for a good stocking stuffer?

Once at the entrance we divided into two groups so there wouldn’t be too many people inside at a time. Each group was inside for about 25 minutes. Serena was stationed by the entrance and summoned us one at a time to slide on our bellies through a small opening and down a slight incline for about 8 feet into the first “room” of the cave. It’s a cave, so once you get further from the entrance it’s dark inside, but the mountaineer and Serena had lamps they could aim around to provide some light. Inside were a remarkable variety of ice and snow formations.

It had never occurred to me that you could ever walk inside a portion of a glacier, or that there would be soaring open spaces that you could stand in. Indeed, from the small outside entrance, there’s no clue that anything like this awaits. The photos with people in them give you a sense of the scale. Those photos that are evenly lit were taken with a flash, the others with just the light from the head lamps, which give you a more accurate picture of the lighting inside, but are a little grainy because of the dim light.

The mountaineer stood at the far end of where we could safely go, which was just before a suspended “bridge” of ice. “You have to stay on this side of the bridge,” he told each of us as we approached. “That’s okay,” I told him, “I don’t want to be under that thing if it chooses that moment to come crashing to the ground.” “You have good survival instincts,” he replied.

Here are some other nooks and crannies:

I emerged at around 9:15 p.m. The sun was shining brightly. I took a few photos of the brilliantly lit windswept forms around the entrance and of the stark expanse of sea ice on the walk back to the Delta. The next sundown at McMurdo will be February 21, 2016, but the light does change in a 24-hour period, and at this time of night forms had more depth than they do at other times of day. Here are photos from the walk back: 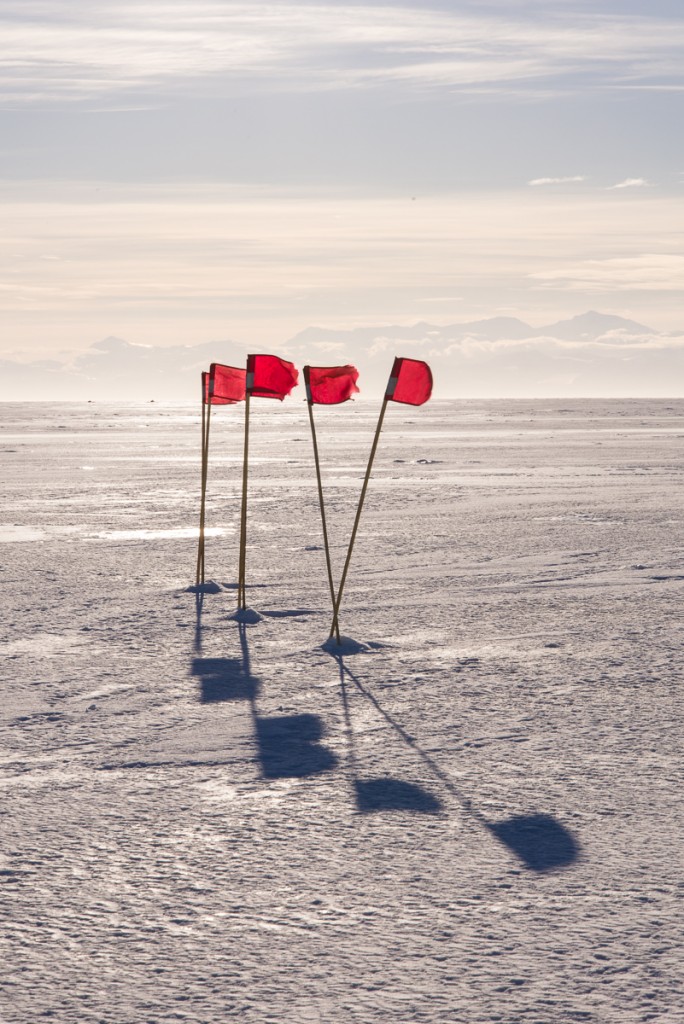 2 thoughts on “Inside the Erebus Ice Tongue”